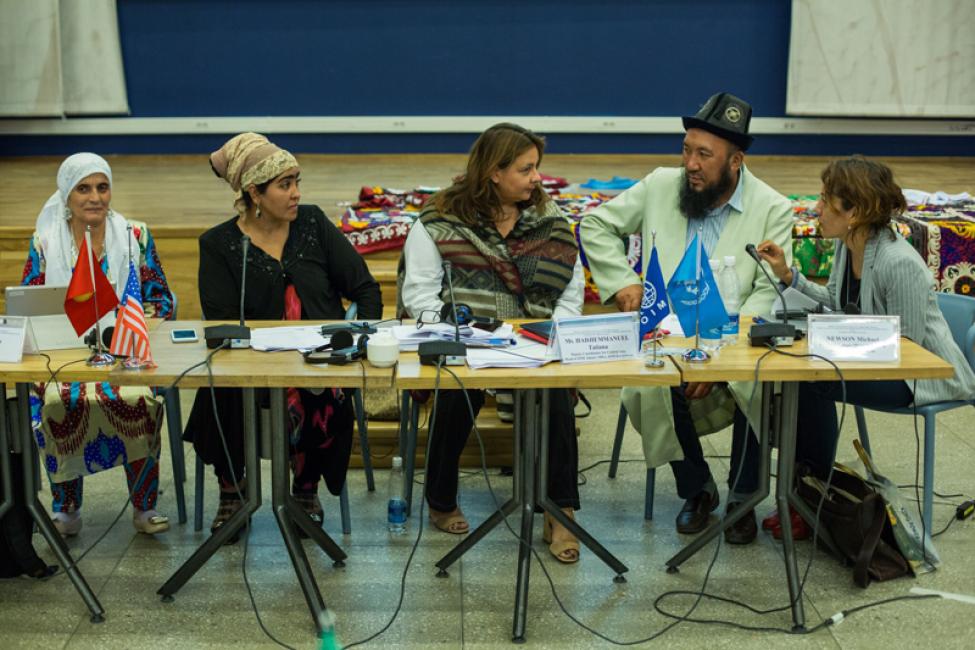 Bishkek – Central Asia has been a region of transit and mobility throughout human history. It contains much of the Silk Road of old and was the theatre for the “Great Game” for power between the Russian and British Empires in the 19th century.

Nowadays Central Asia is both an origin and destination for migrants. This phenomenon came under the spotlight in the Kyrgyz capital Bishkek this week, with meetings of the government-led regional cooperation platform known as the Almaty Process, and discussions on the upcoming Global Compact for Migration.

Ministers, United Nations representatives, community groups, and migrants gathered under the Chair of the Government of Kyrgyzstan, to discuss the migration dynamics and migratory movements in Central Asia and the wider region.

Like the carpets that make the region famous, migration is rich, intricate, colourful and multi-layered. The challenge of moving people to where the jobs are, has been exacerbated in recent times by new controls in Russia – the largest destination country for Central Asian migrants – which has meant hundreds of thousands of Central Asians are barred from access to that labour market.

This has led to massive increases in migration to other countries and regions, principally Turkey, Europe and the Gulf States, but also in migration within the region as Kazakhstan has seen a boom in its construction and services industries.

Almazbek Zholchuevich Asanbaev is Deputy Head of Kyrgyzstan’s State Migration Services and chaired this week’s high-level summit, along with representatives from IOM and UNHCR. He acknowledged that mixed migration flows contain “not only labour migrants and immigrants, but also unwanted elements such as terrorists and extremists. We have been discussing the ways of information sharing and ways of solving problems that are faced by labour migrants and people susceptible to recruitment by extremists.”

Closing the high-level meeting of Ministers, Alan Meltzer, Charge d’Affaires at the US embassy in Bishkek stressed that as migration is a transnational issue is must be subject to a regional approach and frank dialogue.

“This can help shape policies that address the needs of the most vulnerable migrant populations, including refugees, asylum seekers and migrant victims of crime and trafficking,” he said. “Informed policy can also help fight xenophobia by demonstrating how migrants, in all their diversity, contribute to the growth of economies and the enrichment of society.”

During the three days of meetings, an exhibition of photographs about migration in the region conceived by IOM Central Asia, was on display at the American University of Central Asia (Tian Shan Policy Centre), which was also the venue for a lively day of discussions on the Global Compact for Migration.

Specialists from IOM and other organizations were joined by the real experts – migrants themselves and community organizations, including women’s groups, spiritual leaders, trade unionists, returned migrants, national and international experts to discuss the real and personal issues underpinning policy needs.

Tatiana Hadjiemmanuel, Head of IOM’s office in Almaty said that the days of migration-focused events in Bishkek helped to address migrant vulnerability by getting the causes and drivers out in the open. “During forums like this we can make huge progress into addressing protection gaps and get consensus on policy response to migrant vulnerabilities all through the migration process. This is the only government led process in Central Asia that gets inter-agency cooperation, and it is succeeding in sustainably resolving migrant vulnerabilities.”

The Almaty Process promotes sustained dialogue and exchange of information on migration issues and on refugee protection challenges such as, but not limited to irregular migration, human trafficking, migrant vulnerabilities, migrant integration, human mobility and the human rights of migrants.

Its member states are Afghanistan, Azerbaijan, Kazakhstan, the Kyrgyz Republic, Tajikistan, Turkey and Turkmenistan, with Iran and Pakistan as observers.

Subscribe to IOM newsletter to receive the latest news and stories about migration.